Jim Chamberlin’s major accomplishment, the Gemini spacecraft. Though only baseline Geminis flew, there were numerous proposals to adapt this workhorse to different uses. This photograph shows Gemini 7 from the inside of Gemini 6. Public domain image via NASA.

James Arthur Chamberlin was a key member of NASA’s Space Task Group, which became the Manned Space Centre (now the Lyndon B. Johnson Space Center) in Houston, Texas. During his NASA career he was the Head of Engineering for the Max Faget-designed Mercury capsule, then graduated to become the designer of the Gemini capsule. Many of the Gemini-derived proposals in this book came from him, or involved him heavily. He was also responsible for McDonnell Douglas’ unsuccessful shuttle proposal and instrumental in the development of the Space Shuttle that actually got built.

Chamberlin was born in Kamloops, British Columbia, Canada on May 23, 1915. After his father was killed in World War I, his mother relocated the family to Toronto, and Chamberlin eventually was trained as an engineer at the University of Toronto and Imperial College London. After working in the United Kingdom for a few years, he returned to Canada and spent most of World War II designing aircraft.

Jim Chamberlin sometime in the 1950s prior to joining NASA. Public domain image via Industry Canada.

After the war ended he moved on to Avro Aircraft of Toronto, a subsidiary of Hawker Siddley. There he rose in the ranks until he became the chief of technical design for the Avro Arrow, an advanced jet interceptor. When that program was cancelled in 1959 (a source of some chagrin in Canada to this day), he led more than two dozen now-unemployed Avro engineers to the United States; they joined the recently created Manned Space Center in Langley, Virginia during April of 1959. Project Mercury was already underway, with Max Faget’s work on designing its capsule begun even before the formation of NASA in July 1958. Chamberlin became Faget’s right-hand man as head of engineering and project manager in charge of seeing the Mercury capsule through its manufacture by McDonnell Aircraft. NASA’s own history describes him as the man in charge of “troubleshooting problems that cropped up during the early Mercury flights”.

With that experience under his belt, Chamberlin was assigned to be the chief designer of the follow-up to Mercury. The Apollo program was already underway too, but was still years away from producing something tangible, and the Gemini capsule flew into that gap.

Even today the Gemini has its proponents, some even calling for its return as a solution to the United States’ troubles with manned space exploration in the 21st century. It was a very versatile craft, and when McDonnell was shut out of building the Apollo spacecraft (which was given to North American Aviation and Grumman Aircraft Engineering), the manufacturer and Chamberlin bombarded NASA with variations on the Gemini that could perform missions to space stations, as space stations, and even a landing on the Moon. None got built, though a few came close. The real Geminis flew in 1965 and 1966, but by then Chamberlin had relinquished his position in the program and become a troubleshooter for all aspects of the Apollo spacecraft: Command Module, Service Module, and Lunar Module.

In 1970 Chamberlin left NASA and joined the company he’d worked with for a decade—now McDonnell Douglas after a merger with Douglas Aircraft. He first worked on McDonnell Douglas’ candidate for the Space Shuttle, but that competition was won by North American Aviation’s design. He then worked at McDonnell Douglas’ facility on-site at the Johnson Space Center until his death on March 8, 1981. 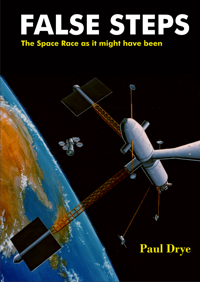